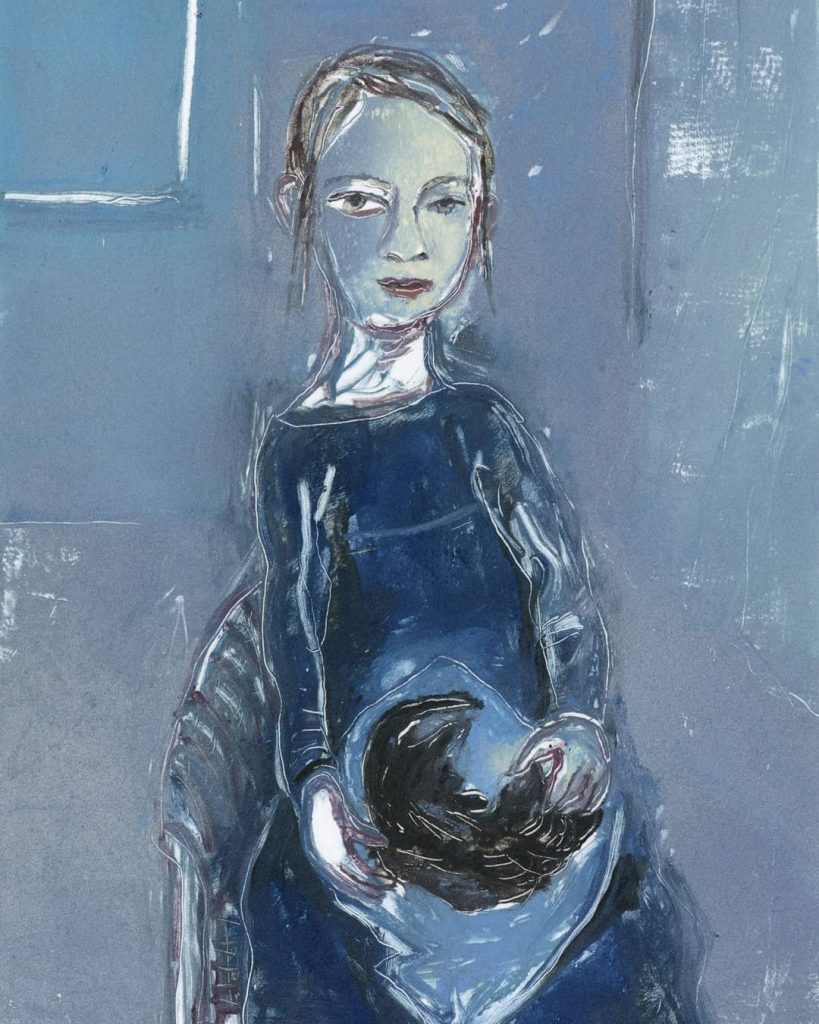 Inferno is the first part of Italian writer Dante Alighieri’s 14th-century epic poem The Divine Comedy. It is followed by Purgatorio and Paradiso. The Inferno describes Dante’s journey through Hell, guided by the ancient Roman poet Virgil.

When Debbie Lee started to post her sketches of a couple of scenes from Dante’s Inferno on Instagram I was immediately intrigued. A few messages of introduction and an appointment was made to visit her studio.

Driving to the town where Debbie lives and works I had to go through Corfe Castle. I had seen it many times and even walked the ruined parapet, but looking again now under the spell of Debbie’s portfolio, the ruined turrets looked peculiarly alive. I was heading to meet someone who understood enchantment, who creates wonderful, provocative stories that stimulate your imagination and demand your attention. 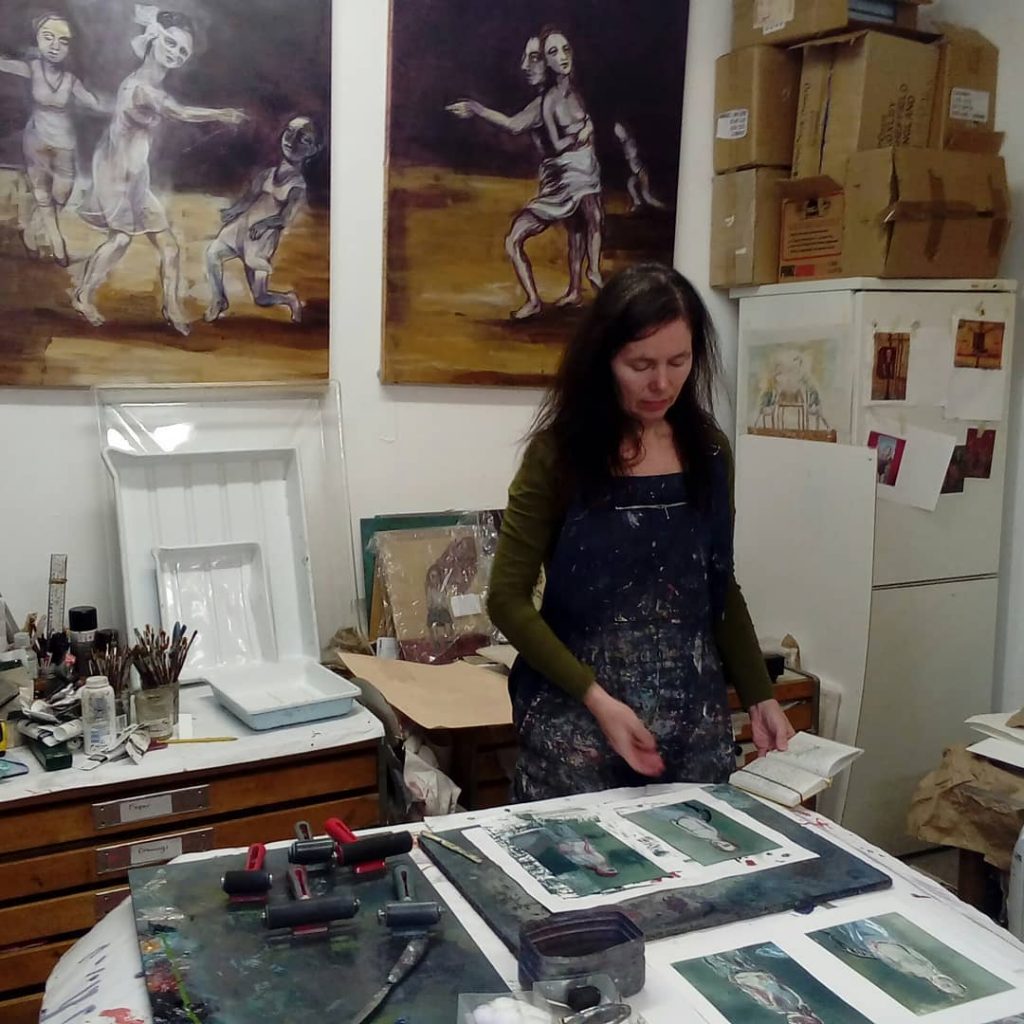 Debbie is busy. She is preparing for an opening night show at the Fine Foundation Gallery in Durlston with an event entitled ‘Into the Woods’ as well as having recent work at The Vanner Gallery, Salisbury in a group show entitled ‘No Woman is an Island‘. 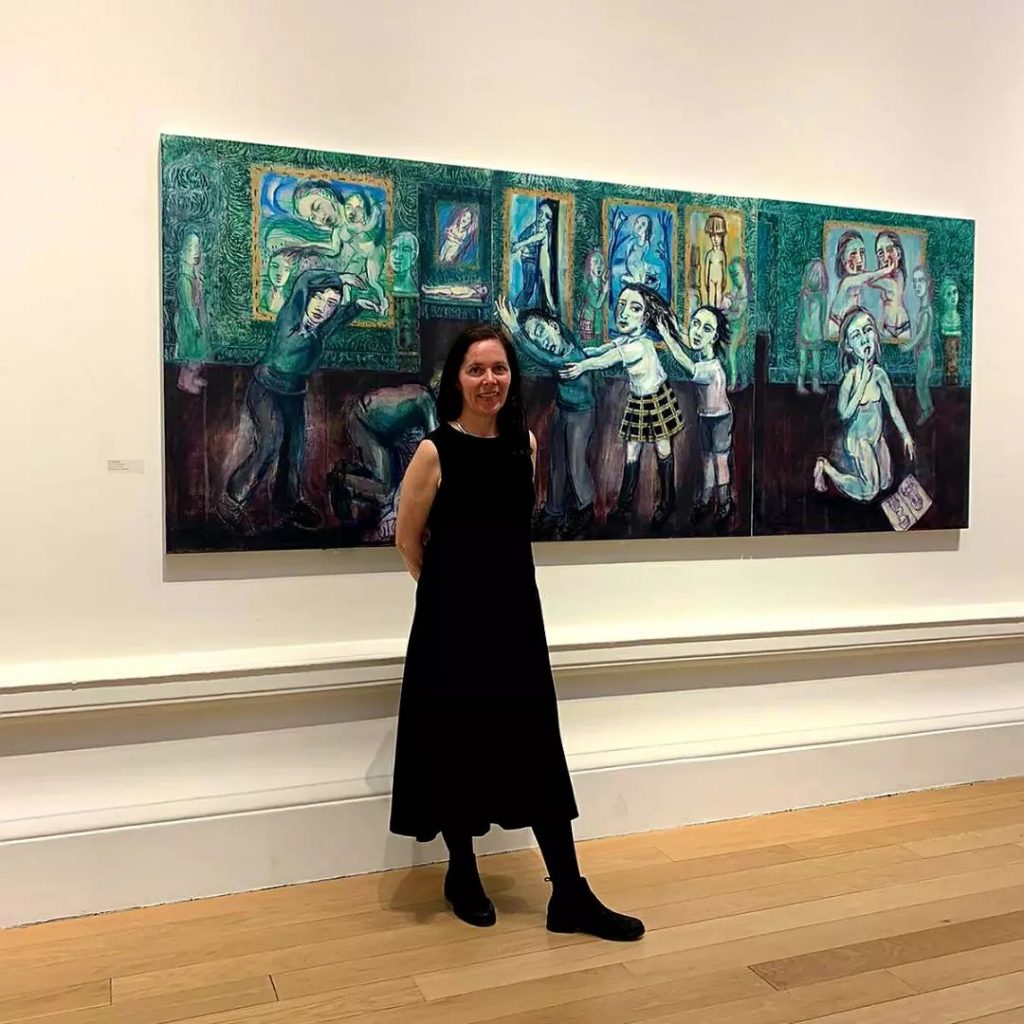 Debbie Lee and ‘Let Loose in the Galleries’

Having studied at Glasgow School of Art it was with great pride that she, recently, accepted the invitation to exhibit work at the Royal Scottish Academy annual exhibition with a large triptych entitled Let Loose in the Galleries

When I first saw Debbie’s work on Instagram I was immediately drawn to the magical, fairytale-like subject matter, the traditional cautionary tales of sinister warning. These are far removed from the dumbed down, sanitised Disney versions.

There is an undeniable quality of intimacy in Debbie’s imagery. I am attracted by the presence of companionship and support which seems so vital in so many of her works. The image of two children walking from the woods is reminiscent of Hansel and Gretel. These two figures, clutching each others hands, at the mercy of the wild woods are vulnerable yet seem to gain strength and support from each other. 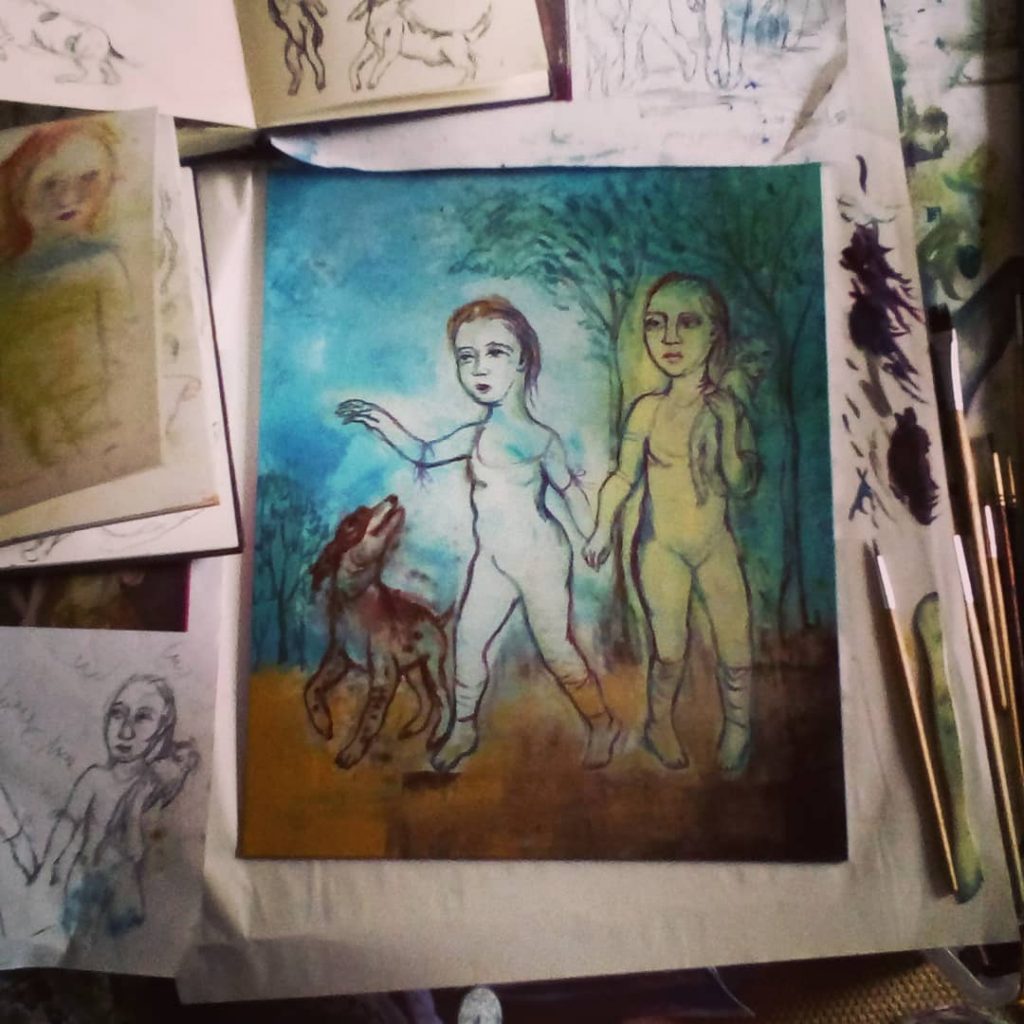 Out of the Woods – painting on metal

The characters are rarely alone. This eschewal of loneliness is a positive, a recognition of the need for help when alone.

Even in the works which show a single figure, there is nearly always an animal companion. Her protagonists do not have to face their journey alone. It reminds me of another of my favourite stories, The Book of Tobit, where the hero is unknowingly accompanied by the angel Raphael, or the companionship of Lyra’s daemon in ‘Philip Pullman’s ‘His Dark Materials’. 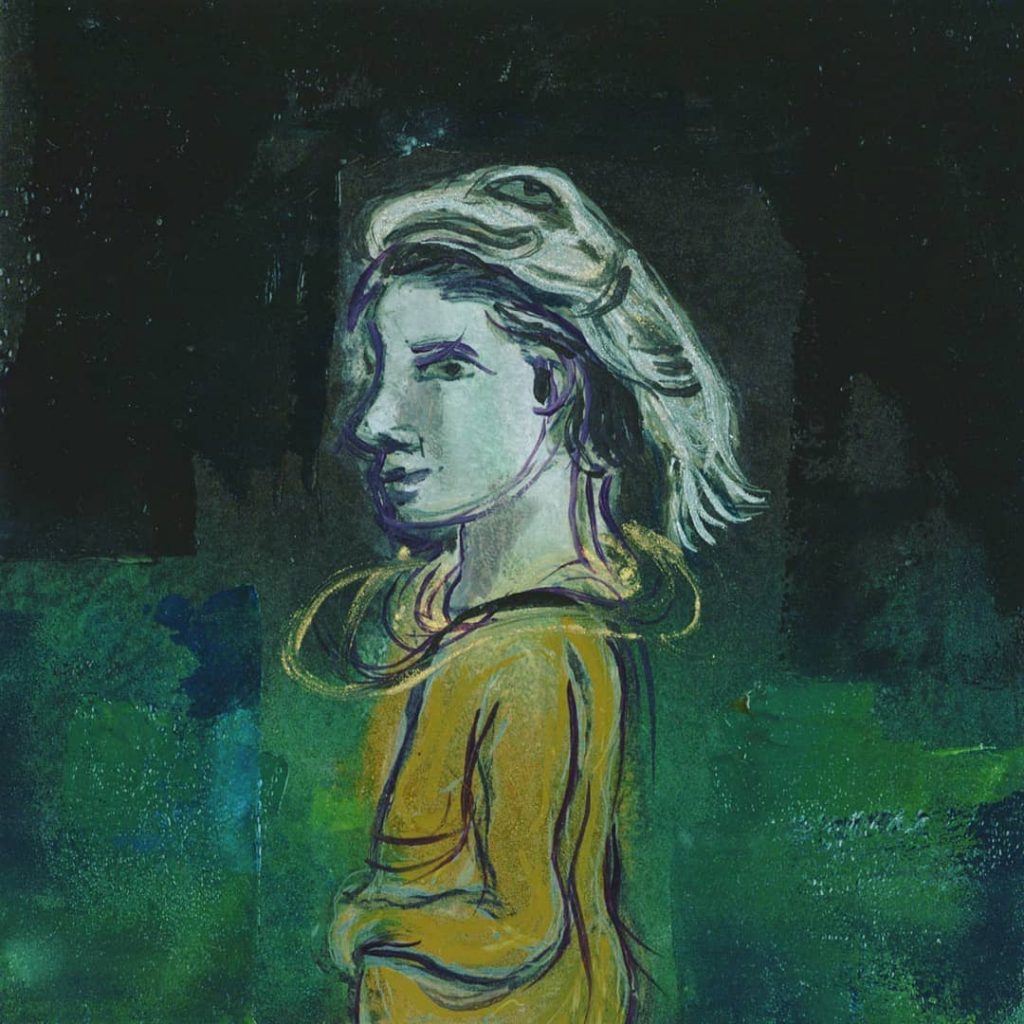 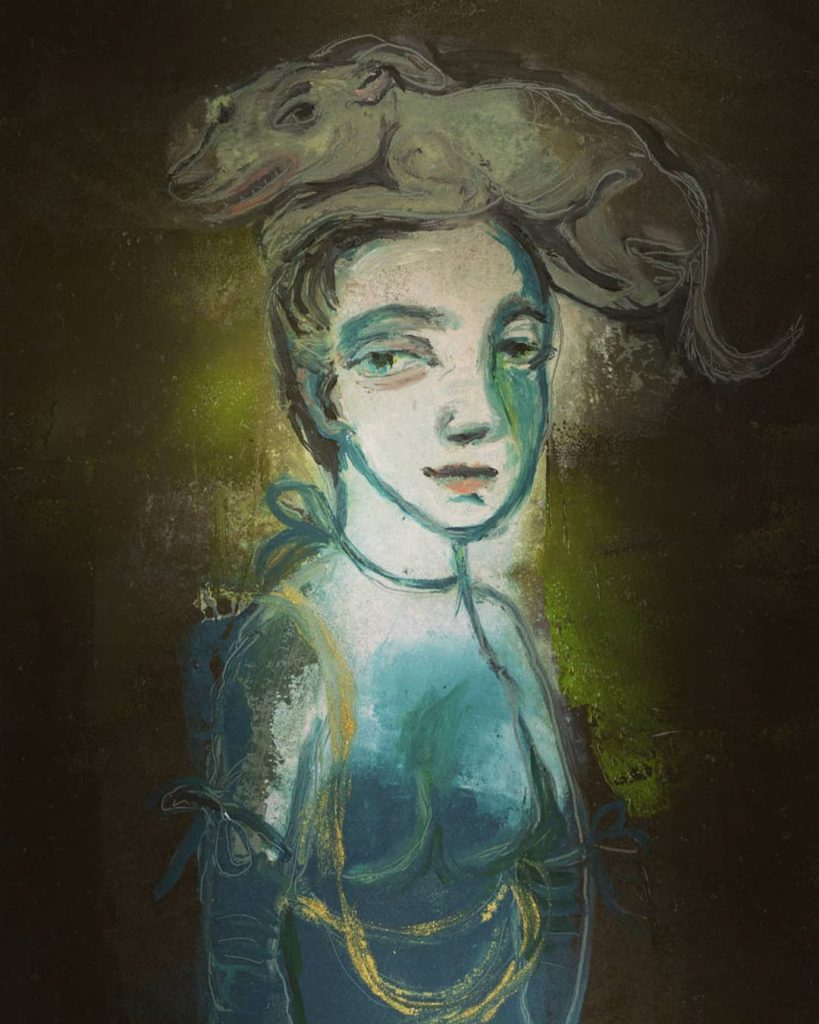 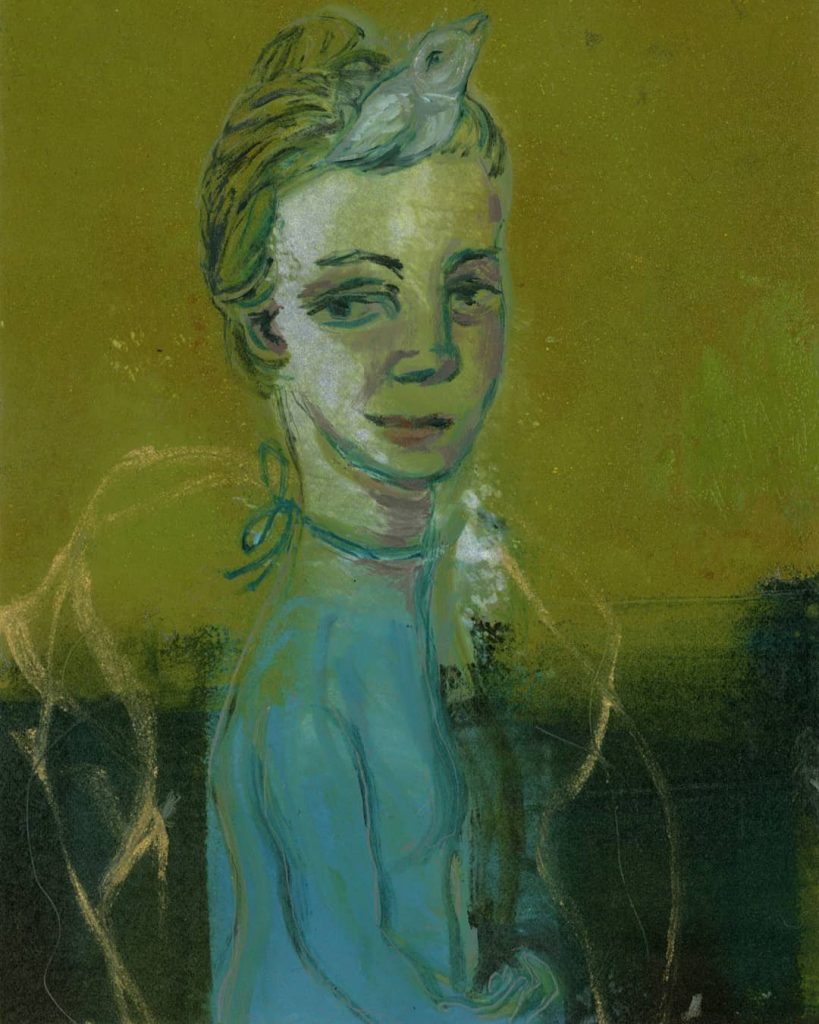 Threat is also a recurring feature, quite often at the mercy of sinister magic, wielded by a male figure. Debbie’s fascination for the macabre and bizarre is wonderfully rendered and leaves the viewer with a feeling of unease as every cautionary tale should.

There is powerful warmth too; familiar domestic intimacy, generational storytelling, from mother to daughter, that is beautifully shown by the tenderness that these paintings evoke.

Debbie’s interest in Dante began in 1987 and her thoughts on how to  illustrate The Divine Comedy has resurfaced again and again over the past 30 years. Debbie has now completed a limited set of lithographic prints with the expert help of The Lemonade Printmaking studio in Bristol. The project is supported by a bursary from The Artists Information Company and Arts Council England. The prints illustrate the 34 Cantos that make up Dante’s 14th Century text, Inferno, and will be sewn together to make a long vertical scroll. This limited edition is available to purchase.

The afternoon I arrive, Debbie is so busy that she barely remembered that her final set of prints had arrived after being lost in the post for some time. They are sitting there in a cardboard wrapper ready to be opened. My questions would have to wait. 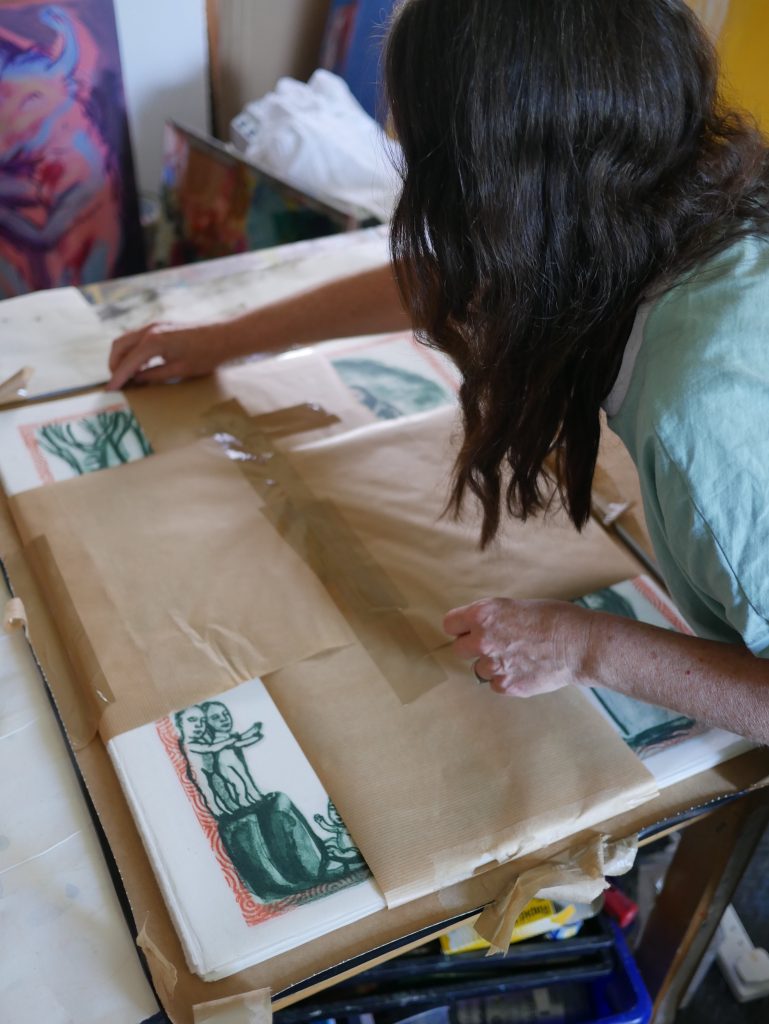 Dante’s Inferno is often misunderstood by being the first part of a trilogy entitled The Divine Comedy – there is no comic element to it. Inferno is nothing less than a harrowing and tortuous journey through a physical hell that Dante invented. Prior to the 14th century ‘Hell’ was an amorphous concept, often mentioned, but never described. Dante was the creator of all the notions of Hell that we now take for granted as always having existed. He gave it geography, the circles of sin, a descent into eternal punishments without retribution with Satan overseeing the torment from his own icy throne at the deepest point of the wasteland.

Botticelli, as well as painting the beautiful ‘The Birth of Venus’ and ‘Primavera’, was one of the early illustrators of the complete Cantos of Dante’s Inferno providing readers with an illustrative map. 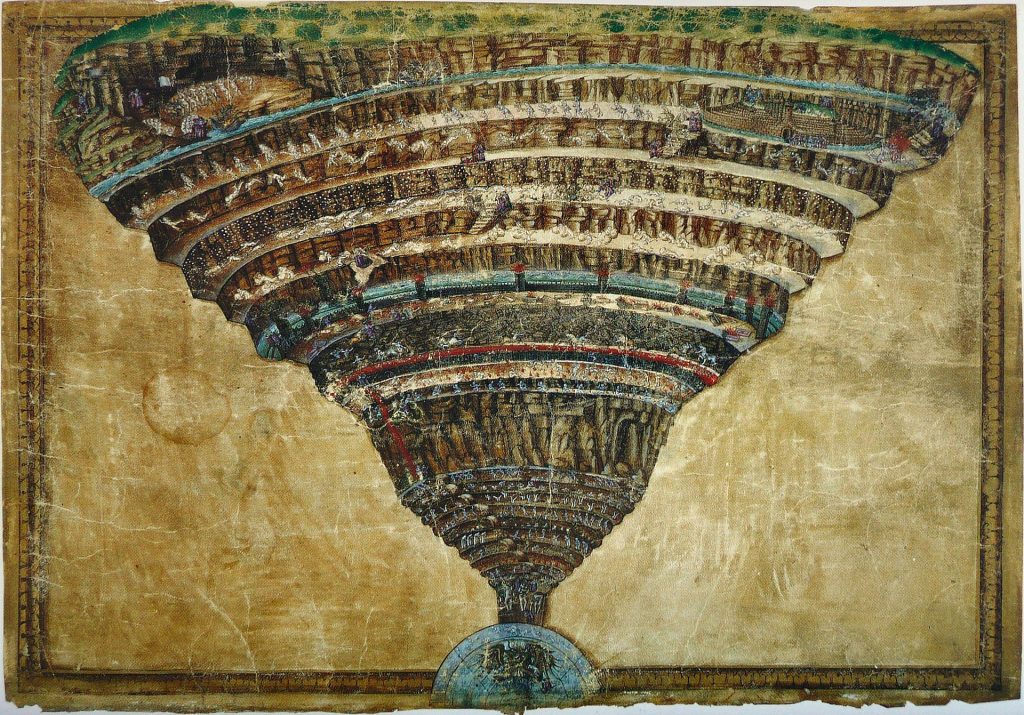 The key thing to note is that the journey goes down and it is a common acknowledgement that Hell exists below us. The descent or ‘fall’ is synonymous with negativity or death. Debbie’s own fascination with falling and transformation seems apt.

Many of Debbie’s works show a descent, the action of falling, a downward trajectory. 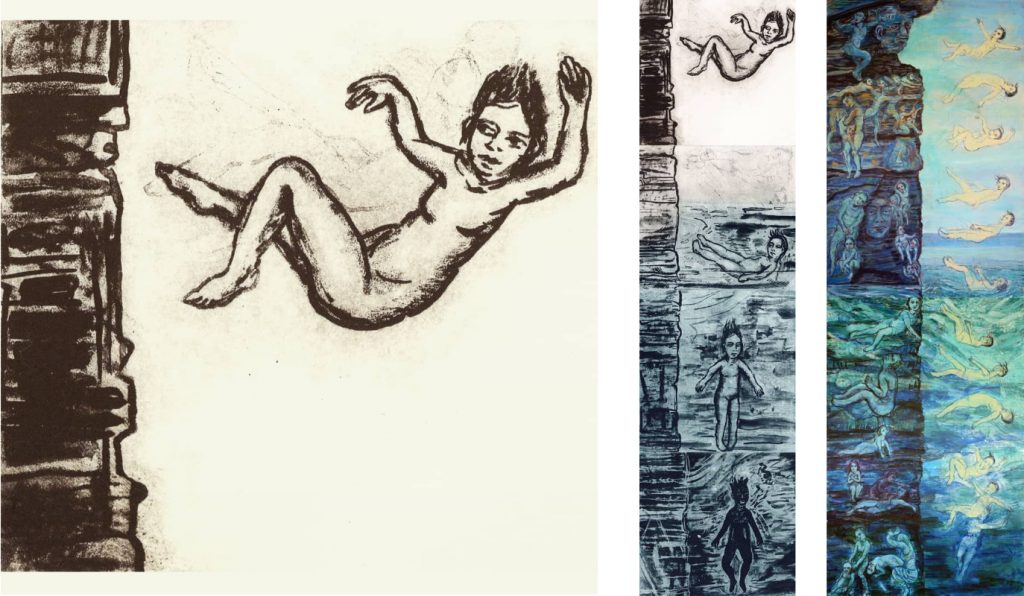 The Divine Comedy was written in the colloquial language of Italy. Dante wished to write something that everyone could read and understand. He had become disenchanted with ‘high art’ and the corrupting influences that came with power and money. He was exiled from his country under pain of death but found a way of paying back his judges by including many of them and their contemporaries as sinners in his version of Hell. He would be delighted that in the 21st Century his creation still holds such impact.

Of course, it is still a work of fiction.

Debbie spent a year in India on a Commonwealth Universities research scholarship to study traditional folk arts and to develop her studio practice accordingly. Whilst there she found Indian scroll painters from Midnapore made something called a Jan pat which was a pat painting of hell which depicted the deadly sins. 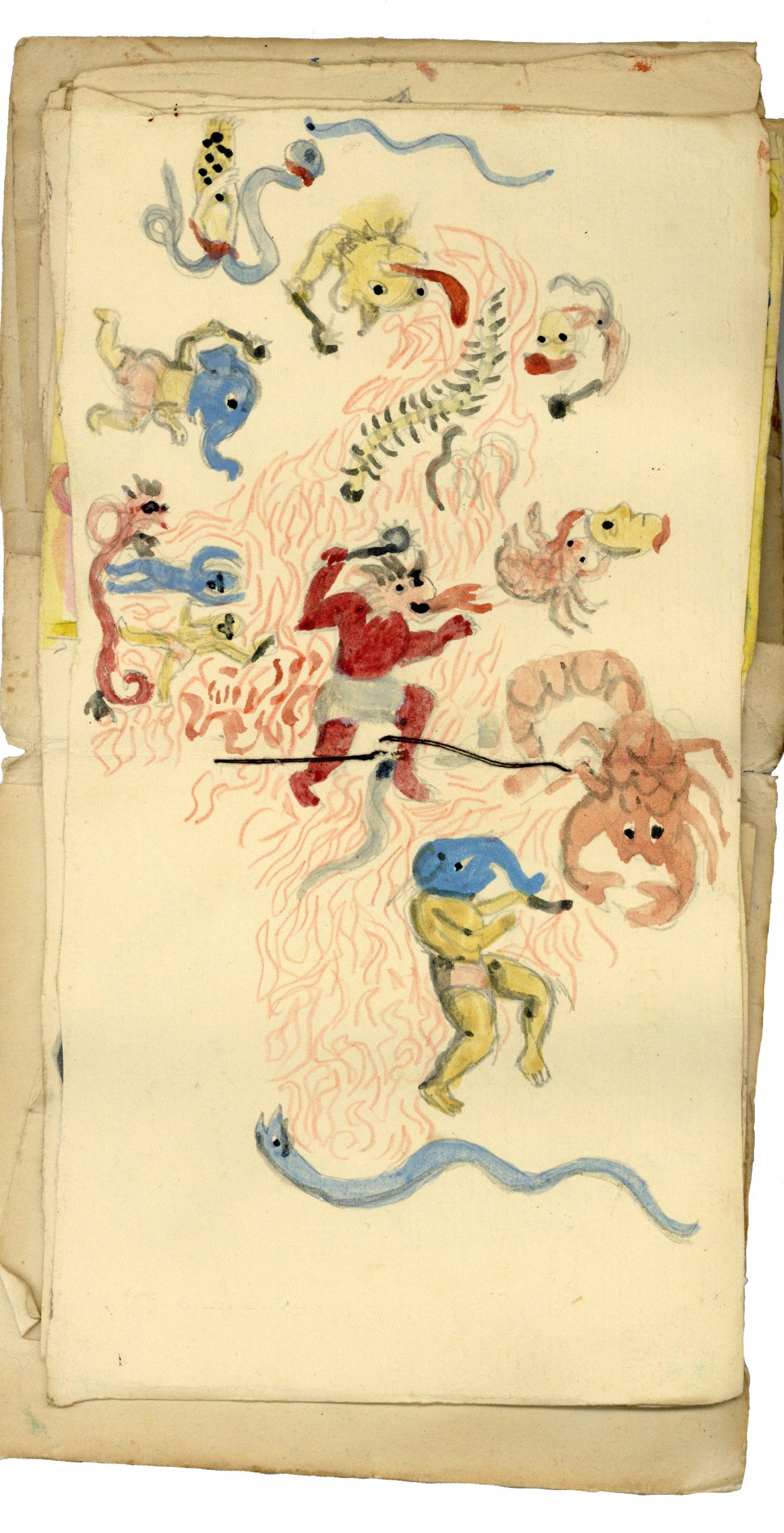 Debbie’s sketchbook from her time studying in India

It is a monumental task to illustrate each of the 34 Cantos. The author provides rich and powerful visual imagery within each of them asking several questions of our own morality as well as that of our current society. Despite the journey being arduous and filled with cruelty Dante reacts with some sorrow, witnessing sin which might act as cautionary warning in his own life. By including his enemies in the narrative, Dante, the author, inflicts revenge but Dante, the character, shows mercy and forgiveness as he is on a path to beauty and enlightenment as described in the following two books, Purgatory and Paradise.

The mercy expressed by Dante, the character, is the reason why I think Debbie is a wonderfully apt illustrator of the Inferno. The scenes are still populated with horrors and unflinching violence but she treats them with feminine compassion. Her Dante and Virgil often swap positions, bodies and genders to portray the human being as a whole and not just a masculine personification of triumph over adversity. 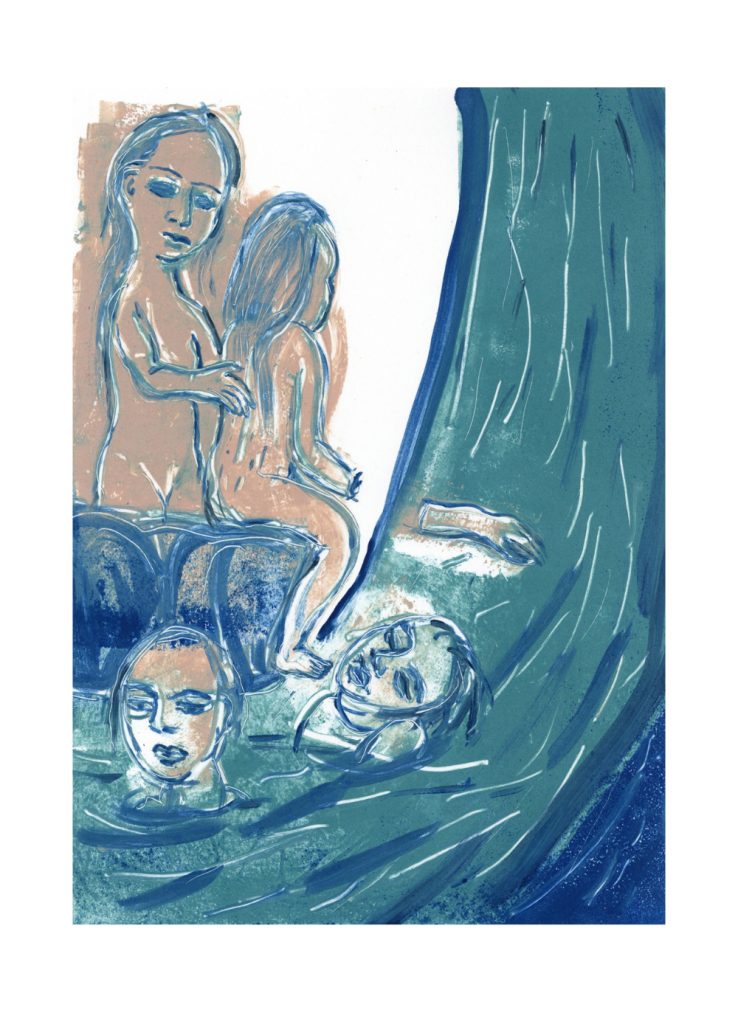 Dante humbly accepts a guide. He is no archetypal hero but a person wrestling with his own sense of morality and worth. Debbie’s characters show a regard for each other. Although Dante is incapable of helping or offering relief to those suffering through their own sinfulness, Debbie’s Dante looks as though he might be pausing, attempting to deliver solace, offer compassion and stay awhile.

Dante is helped along the way by Virgil, a Latin poet born before Christ, (in Christian theology, any being living before Christ’s birth is condemned to Limbo eternally). This too, is the final place for all unbaptised children. This greatly disturbed Debbie’s motherly instinct. Her distress found outlet in the accompanying sketch with babies being tossed into a ditch. 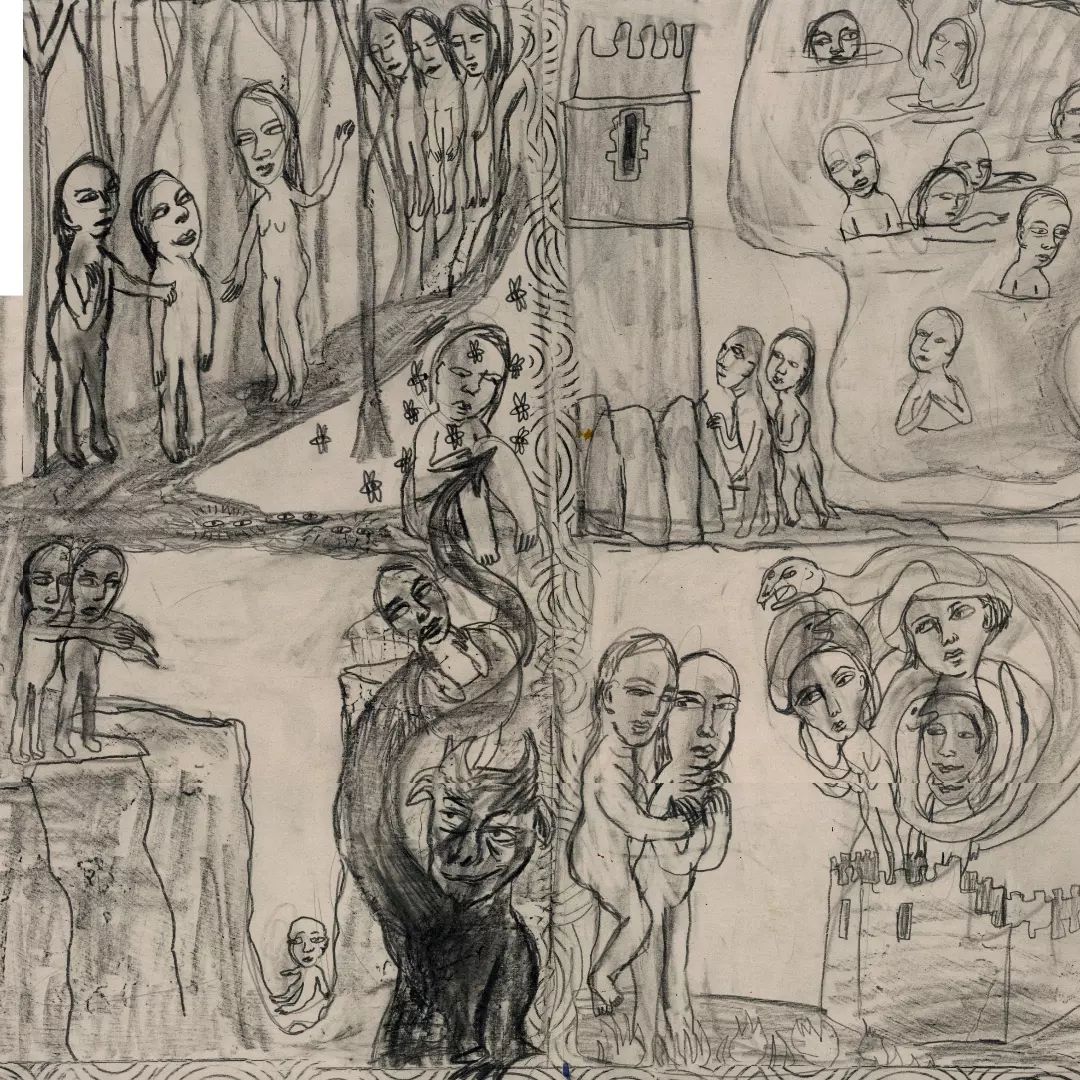 Debbie’s sketch for the 1st print of the Inferno series 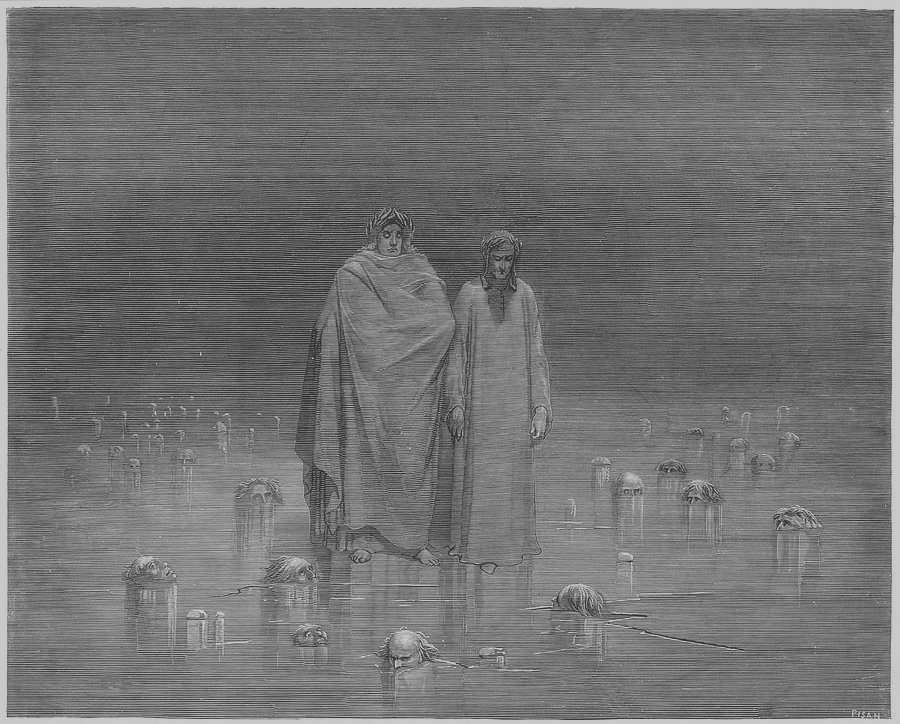 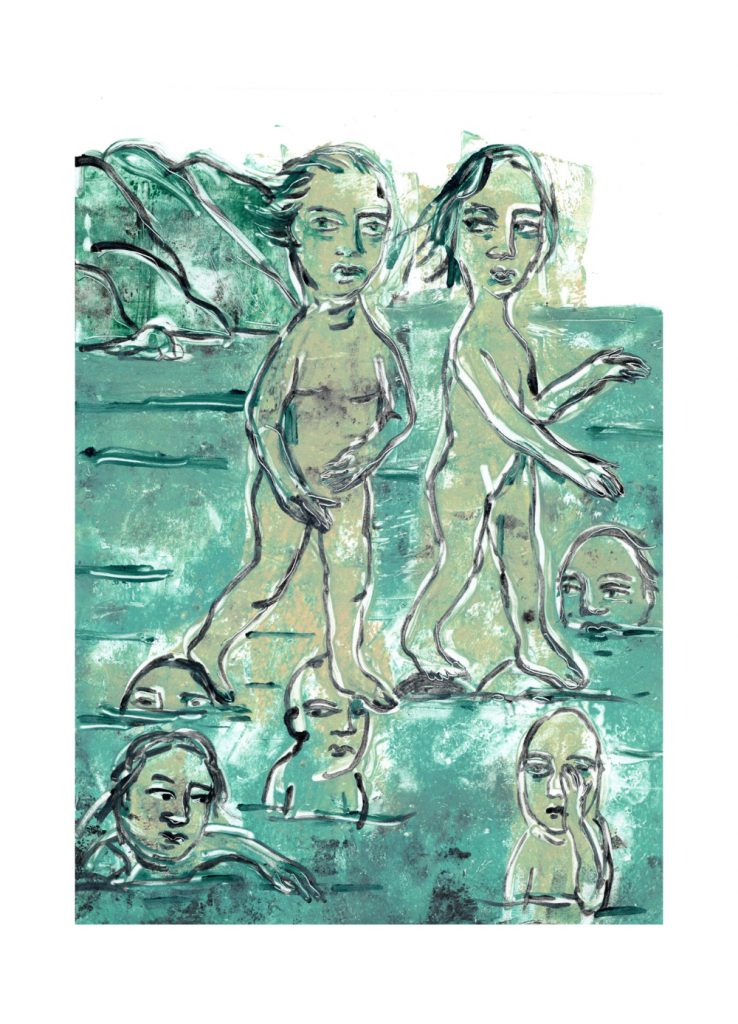 In Canto 13, the seventh circle, where those who commit suicide are perpetually consumed by Harpies, I witness the best of us. In the most damned and sorrowful of situations where despair and pain are at their most evident Debbie manages to imbue her version with compassion. As they exit, Dante can clearly be seen looking back with pity. 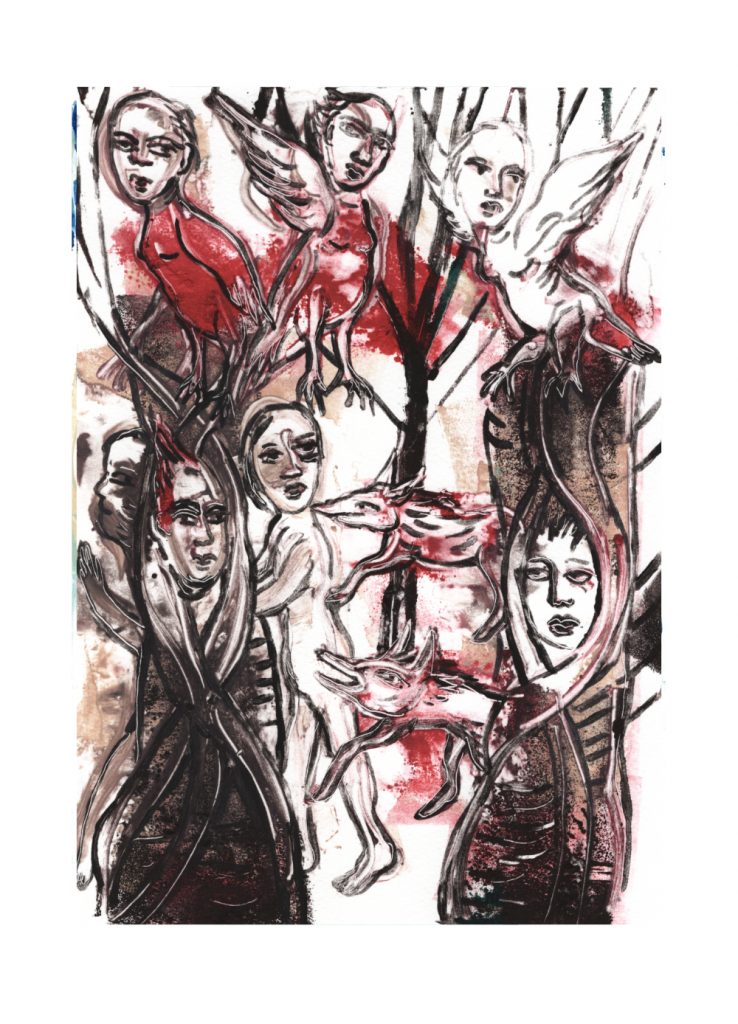 This is not Dante, the 14th century Florentine, expressing his anger against the corrupt and powerful of his age. This is not a man using his intellect to wreak revenge and carve his name in history.

This is a 21st century woman with all her emotional intensity gathered from her experience as a daughter and a mother saying … wait … this must not be so … it can not be.

In the final canto Dante and Virgil have to climb Satan’s stubbly legs to escape Inferno. One character embraces freedom while the other looks back, I can only assume in sorrow for those who can not feel the warmth of sunlight on their skin. 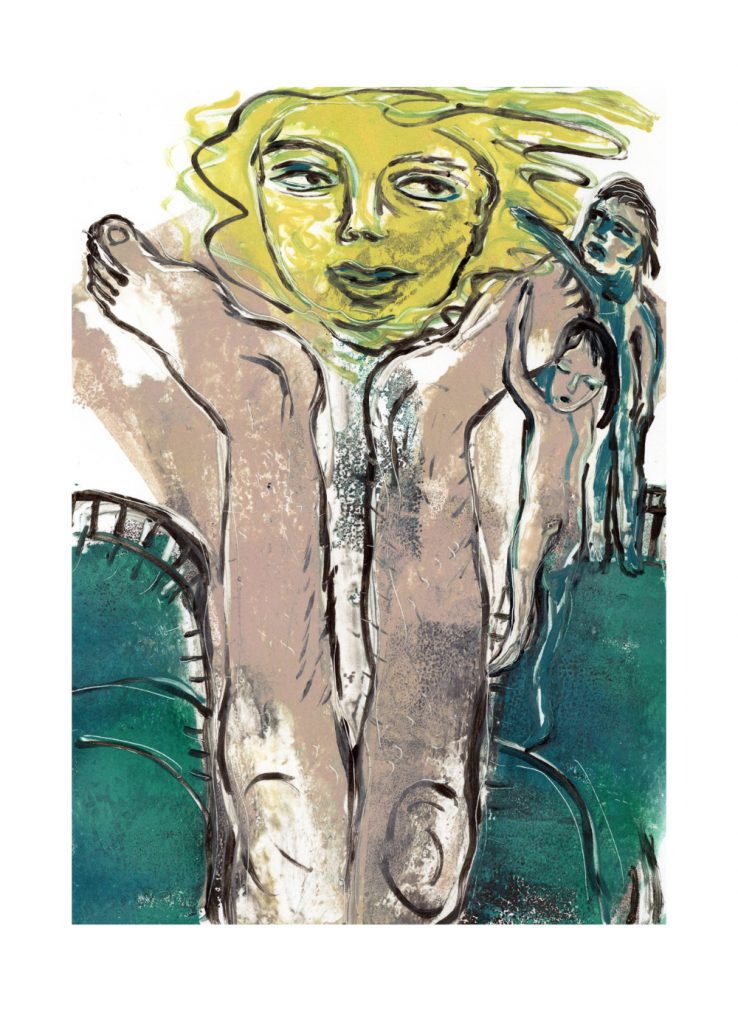 The final work is composed of a series of lithographic prints representing the 34 Cantos. These are printed on the most elegantly thin Atsukuchi paper. Each of the four pieces will be split into two vertical panels of three images and then carefully handsewn together. The journey through Hell will be read in the tradition of Sanskrit storytelling in the format of a vertical scroll; read from top to bottom. 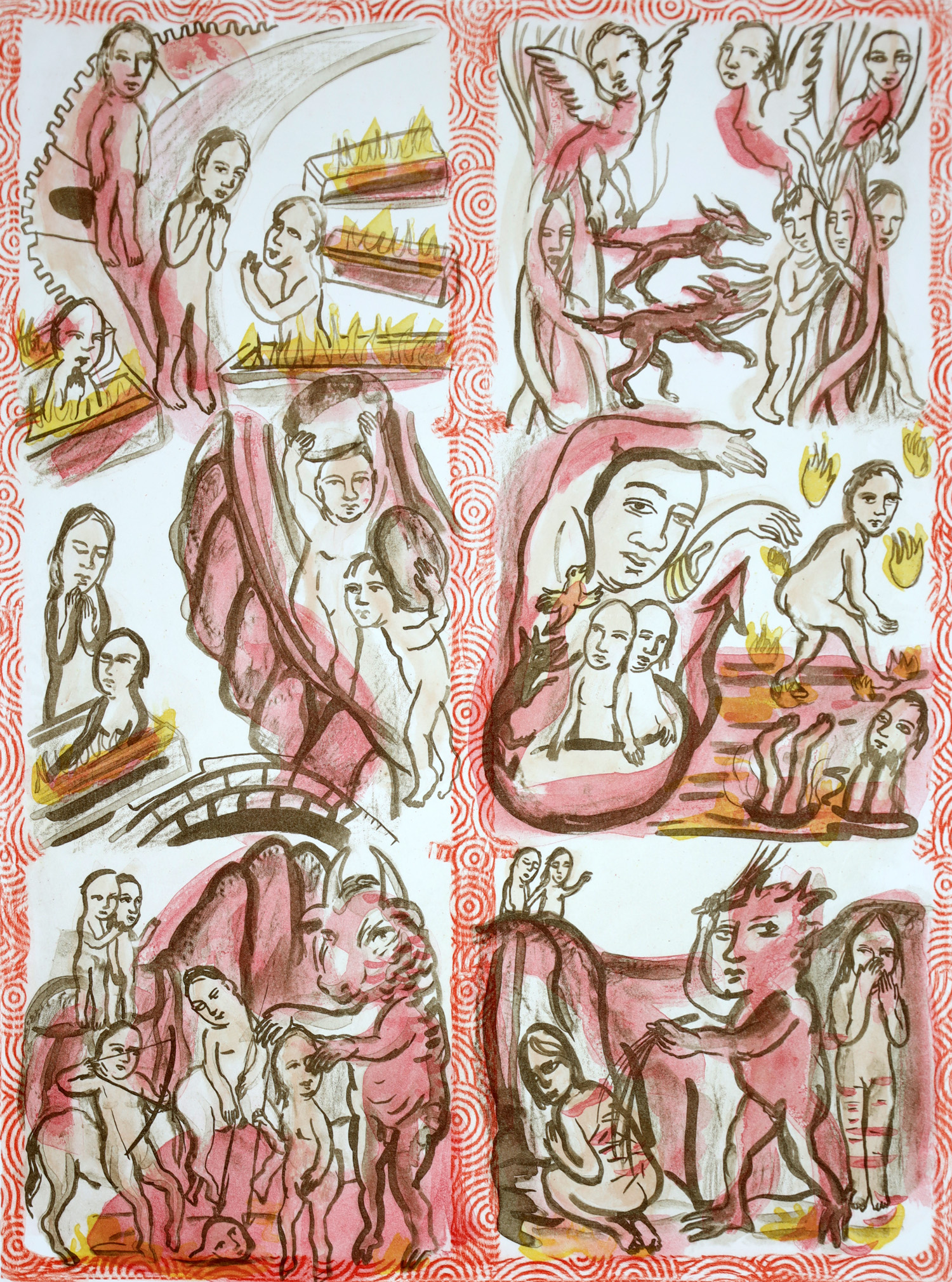 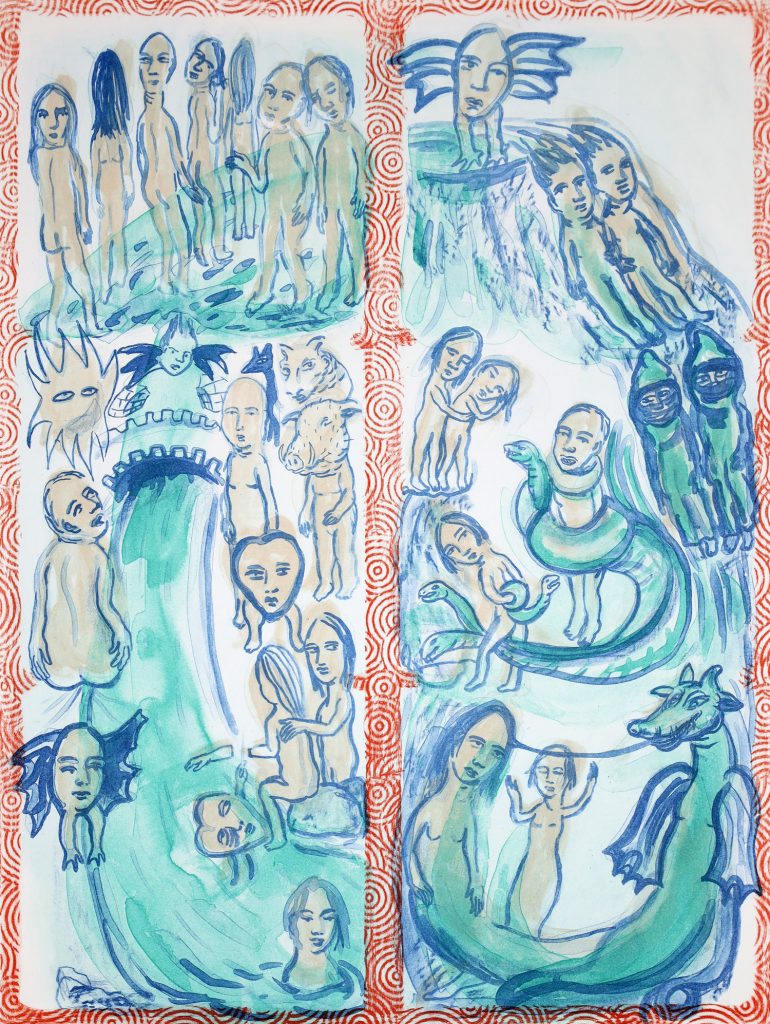 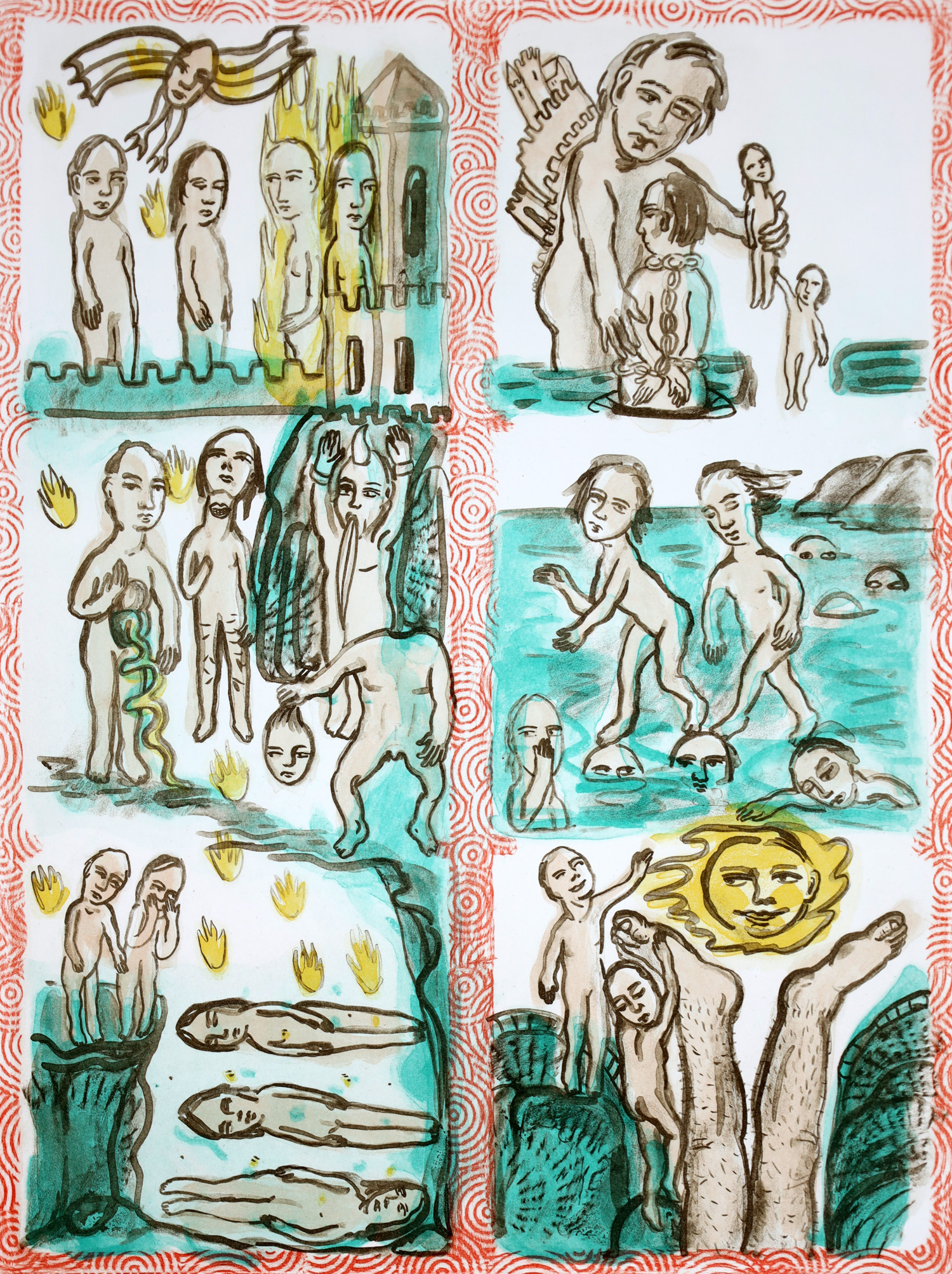 I am a Dante enthusiast. I have several different translations where I can discern differences of expression through subtly varied words, each trying to tease out something new and original. I have enjoyed many of the illustrations and visual renderings of the text; from Peter Greenaway and Tom Phillips to the beautiful Botticelli drawings and the popular Doré engravings.

Debbie’s illustrations of the Inferno are rich in humanity, the most sympathetic and tender I have seen. I hope every Dante society will quickly purchase one of the limited sets of scrolls, for they have merit and importance and embellish one of our most precious literary works with a previously unseen, feminine humanity.