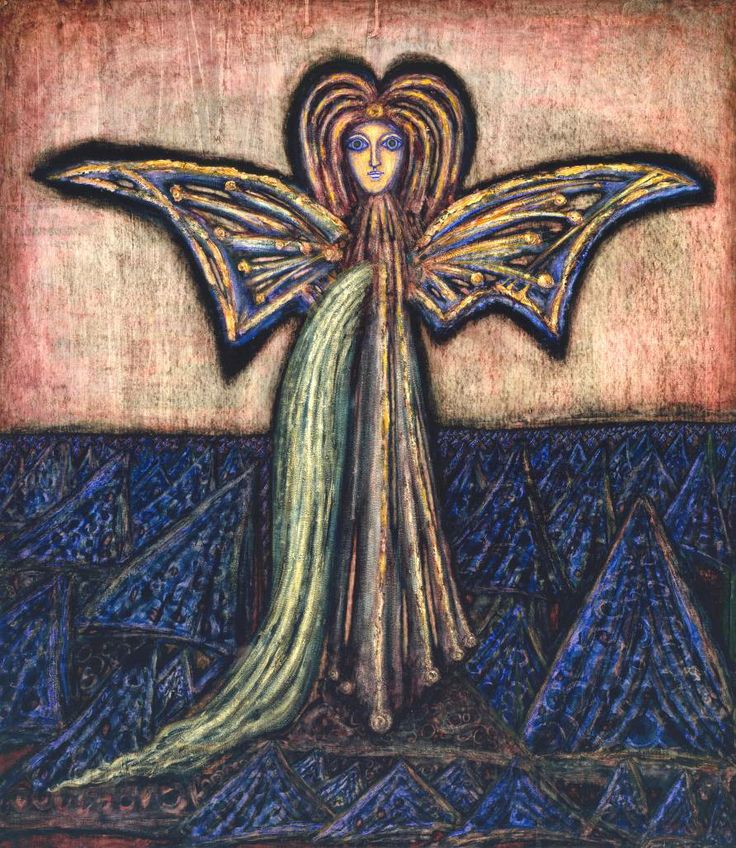 .I have been very kindly invited to say something about angels this morning, on the occasion of the unveiling of the windows. And I must say, it is with some trepidation that I take on this address because angels are a very difficult subject. Also I am well aware of the fact that there must be, in the church, many men of very high rank, theologians, who know far more about angels than I do. Fortunately, there are many ways to the spiritual life; the official way is not the only way. Christ himself has said, "... except that ye be as little children, you shall not enter the kingdom of heaven". This, I believe, is the vital statement about the perception of the spiritual world, the world of angels. I shall try and concentrate this address on that state of consciousness, that quality of consciousness, which perceives the angels. Again, I am not a theologian. I shall try and speak to you this morning as an artist, with all the defects of that point of view.

We live in a society where the angels and the divine world are not a normal part or a normal presence in our environment. Our environment is empty of them. It is empty of them for a very important reason, which is that our civilisation is the only one in the whole of the history of mankind. some 20,000 years, not to be based upon a metaphysical reality; that is, a reality which transcends biological man and that of the vested interests of the ego; a metaphysical reality which is unknowable, absolute, and yet a reality which can have a relationship with us, and we with it. Our civilisation therefore can be considered abnormal.

The scriptures say the spirit quickens and gives life, and the letter kills. The history of religious experience shows us religions are born of a vision and end as a formula, a crystallisation, a rationalisation.

This need to find security in rationalisation, in concept, and to justify by measurement and theology, appears to be a peculiarly masculine activity and as the masculine psychology has dominated and is dominating western civilisation, this contracted reductionism dictates all forms of education and is the main cause of the split in European man's nature: the split between the soul, the intellect, the heart and the body. This is the schizophrenic condition of modern man: a divided nature cannot see reality. What is more, our environment is empty of the spiritual world and this emptiness is characteristic of modern life.

Take away the warmth of human experience from the new scientific universe, and you have emptiness and meaninglessness; and this question of emptiness is very, very important; it makes us feel very alone. Our environment does not gather around us the family of the spiritual world of which the angels are part.

There is one period in all our lives when the third power is active in us and that is in our childhood when we experience virginity of consciousness, direct perception, seeing directly with the wholeness of consciousness before it is obscured by the conditioned mind. It is the conditioned mind that prejudges experience, so we never really experience anything, and this is a kind of prison, active in all fields of mental activity. This is the act of possessing and manipulating experience from the point of view of certain conditions and it withers the virginity of consciousness and experience becomes a mirage. Hence, Christ’s statement, "accept that ye be as little children, to enter the kingdom of heaven". It was the great Indian saint Ramakrishna who said, speaking of those dark periods that you find in civilisations of the world, which the Hindus call Kaliyuga, I quote, he said "in those periods one does not hear the voice of God except in the mouth of a child, a madman, a fool or some such person"

In the great spiritual tradition of the Sufis there is a very ancient idea that in all our hearts there is an eye. And when this eye is shut we are asleep, we are sleepwalkers walking in the nightmare of the world.

Angels appear in most cultures of the world. To use an analogy of the fact that things work at different speeds, it is possible, I think, that angels live at a very high speed, higher than us, and that is why we call them invisible.

The angels are a wind; they are winged because they belong to the open skies of the spirit. They live in the oxygen of God. The angels are a wind force of divine mind. They are the spiritual intelligence that connects all worlds; they unify and they help transform our consciousness and our awareness. They are infused with the beauty of the divine world from which they come. Angels are essentially a being of the universality of the spiritual life; they redeem us from our selfish provincialism, our narrow tribal view of life.

The new discoveries in science show us that the world, the universe, is not just material as supposed by the nineteenth-century scientist. It is not in a way material at all. It appears to be made up of vibrations and atoms and the flow of vibrations. The crisis in modern science, it seems to me, is centred around the question, "What is the relationship of the human mind with these vibrations?" One of the most important indications that seems to arise from this crisis is the realisation that perhaps there are not two things, spirit and matter which are divided and in conflict, but different degrees of one reality: different degrees of vibrations on a scale from the lower end of vibrations we call matter to the higher, the vibration and radiance of the world of light which is the world of angels. We see according to our place on the scale of vibrations. This seems to me to throw a lot of light on the whole question of the experience of the spiritual world.

According to traditional knowledge, man is placed in a critical position on the continuum of existence. Critical because he is placed between the demonic world and the angelic world and both these worlds are reflected in him. Civilisations are subject to psychic rhythm and seasons. At the end of a cycle of civilisation, man forgets the true meaning and significance of his life and becomes no longer spiritually educated; his inner defences are weakened; the forces of the demonic world are able to penetrate him; and take over his life by hypnotising him, confining him to the prison of biological existence, influencing and forming his education, his culture. All this is clearly shown in much modern art in which the demonic plays a very large part.

The windows in a building are instruments of light. One can see the religions of the world are like different windows through which the divine light shines. They are all different colours but the divine light has no colour, its universality gives light to all colours. The divine light is not the colour of any particular religion, although all colours bear witness to, and manifest, that light. Hence, divine light is the realisation of this spiritual fact, and there is no room for quarrelling and dissension and for all those terrible crimes that have disfigured and mutilated man's religious history and destroyed man's consciousness of the divine: a history of cruelty that has caused the angels to weep, to weep and to weep, as they wept at the crucifixion of Christ.

Turning away from the dark narrow prison of collective religious egotism that is destruction of life, we look into the clear air of universality and we see that the angels are countless bodies of light in the odes of eternity. They are the signs and the witnesses of a secret relationship, a secret friendship between us and the divine world. They are an awareness of a new life, a new consciousness: the birth of love, the dawn of consciousness.

There is in each one of us, an unconscious angel of dawn, of first being, of life. In the Koran it says, "yes indeed we created man and we know what whispers in his soul".